She answered the phone…
“Hello”

“Hello, Ms Johnson?” His voice was deep, kinda raspy, and she wondered if he looked as rugged as his voice sounded…the thought made her pussy wet. She liked them sort of rough and tumble, it made the time so much more enjoyable.

“Ms Johnson, this is Jack with your insurance company and I would like to come out and bring you the forms for your signature.”

Right, the insurance company, hmmmmmm… did she dare?
“Sure, Jack, I would appreciate that, when can you come?”

“I can actually head your way right now, Ma’am.” The ma’am was a nice touch, she thought, so she agreed, confirmed her address and hung up the phone. “Better get ready” she thought, grinning to herself.

She made sure the table was set up and the restraints were handy, then she answered the door.

“Please come in” she smiled up at him. He was just as rugged as his voice, and she thought it was a pity that he didn’t have a little five o’clock shadow, that would have been an extra special treat.

They sat on the couch and made some small talk and as he reached for his briefcase to get the forms, she stopped him.

“You look like a pretty strong guy, could you help me with something before we get to the forms you need me to sign?”

“Sure, I am happy to help you out.” She smiled, thinking to herself he had no idea.

They walked into her play room, as she called it, and he said “This is an interesting table you have here, looks like a massage table, but a little bigger.”

“I do sometimes use it for massage” she replied, moving closer to him. She backed him against the end of the table.

“You should probably take off your tie” she said as she started to undo it. “You might also want to lose the shirt, too, I would hate for it to get dirty.” She pulled off his tie and began to unbutton his shirt.

“That might be a good idea, what is it you need me to do?”

She slid one hand in his hair, pulling his head down to hers and with her lips close to his. She looked into his eyes and said “What I need for you to do is be quiet and put on this blindfold.”  As she slid the blindfold over his eyes, she lightly ran her tongue over his lips.

“Ummmmmm” he started to say something but she put a finger over his lips. “Shhhhhh” she whispered. “I promise this won’t hurt a bit.” She slid her hands over his chest and down his stomach, where she undid his belt. “We definitely won’t be needing these” and she yanked his pants and his underwear down around his ankles. “Now, why don’t you go ahead and lay back on the table, let me get those clothes out of the way so you can relax.”

“Should…should we be doing this?” he asked.

“Honey” she said, “if you want me to sign those forms, then we are just gonna have to do things my way for a little bit, understand?”

He thought to himself as he lay back on the table “The customer is always right!”

She stripped off his shoes, pants and underwear then strapped his ankles to the table. He was beginning to get a little concerned, until he felt her trail her finger tips up the inside of his thigh then over his hip as she moved to the head of the table. She hummed to herself as she tied his wrists together above his head then turned on the stereo, some sultry jazz she hummed along with as she trailed her hand down his other side. She was never sure if it was the man or the rope, but she knew that a man tied to her table was possibly the sexiest thing she had ever seen.
She began to slowly tease him, stroking his body, running her nails along sensitive areas of his body, his cock rock hard, she could see it throbbing, but she didn’t want to touch it yet, not until the time was just right.  Touching him, and watching his hard, throbbing cock, practically begging for her attention was turning her the fuck on, so she grabbed her favorite “personal massager”, sat in the chair next to the head of the table and turned it on.

“Is that what I think it is?” he moaned.

“It is indeed” she said. “You are quite a turn on, laying there all naked, hard and helpless, so I am giving myself a treat. I bet you wish you could watch, don’t you?”

“No, but you can listen” and she ran her tongue over his ear, moaning as she brought herself off, three times in quick succession, making sure he heard just how much pleasure she was giving herself. She leaned over his head and ran her fingers through his hair as she ran her tongue over his lips, then kissed him deeply, sucking his tongue between her lips, tasting him, her other hand ever so lightly stroking his cock. He kissed her back, plunging his tongue in her mouth, struggling against the restraints, trying, needing to touch her like she was touching him.

“I’ll tell you what, honey, you ask nice, and I’ll think about it” She wrapped her hand around his cock, stroking it firmly, once, twice, three times, he was so close…until she stopped.

He whimpered “Fuck, stroke my cock, c’mon, stroke it.”

“Ask me nicely, honey, that’s all you have to do.” She kissed him again, teasing his tongue with hers, her fingers caressing his balls.

“So hot” she moaned and she kissed him deeply as she stroked his cock, his body straining as he shot his load all over his stomach.

She took off his blindfold, untied him and picked his clothes up off the floor. 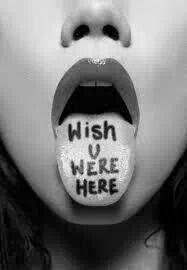 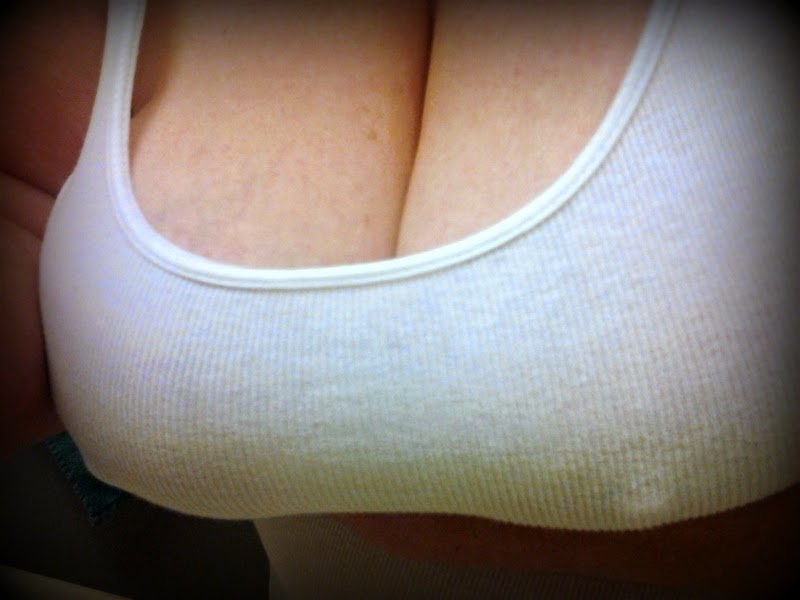 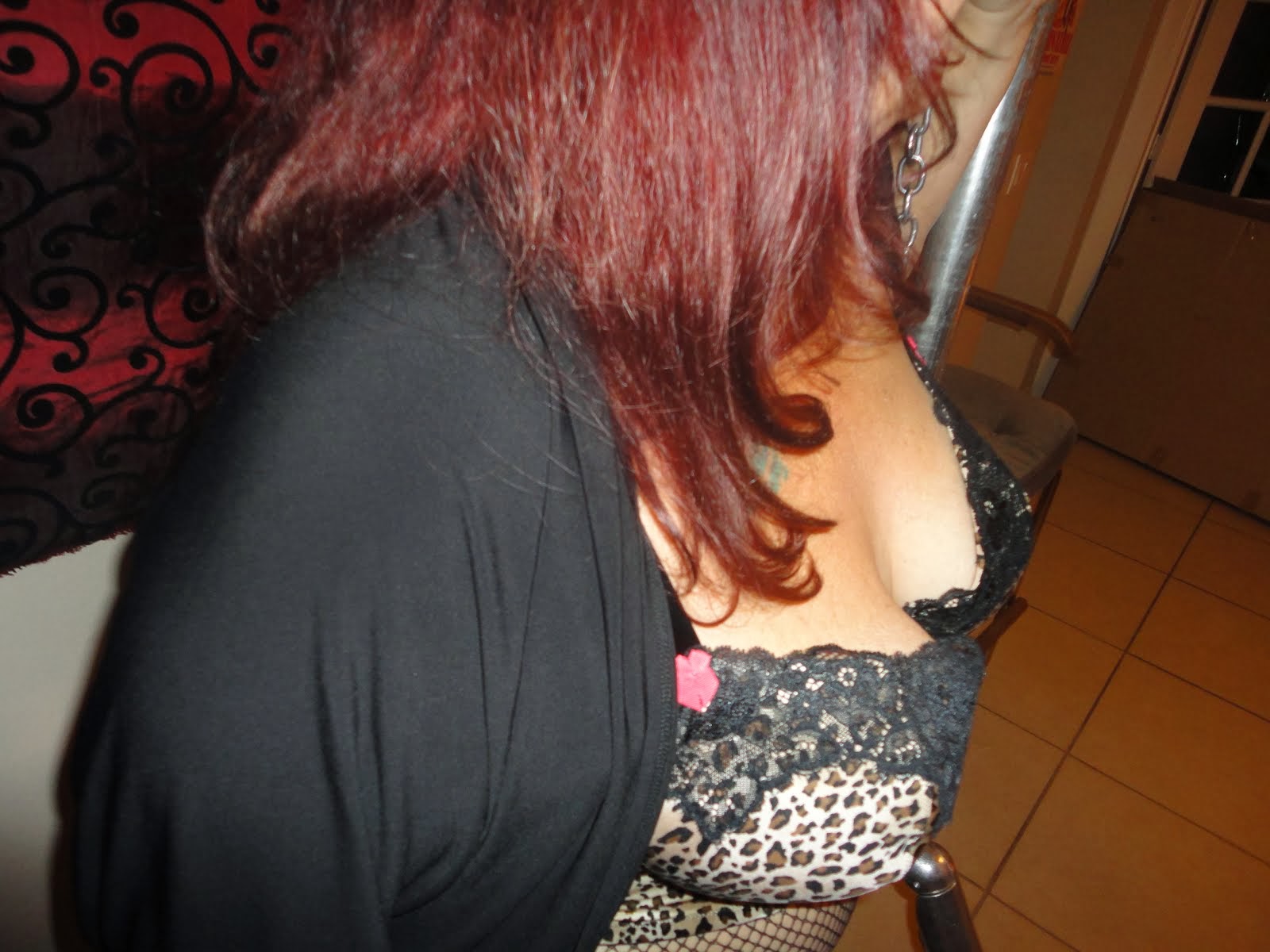 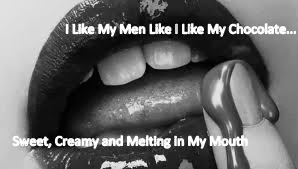 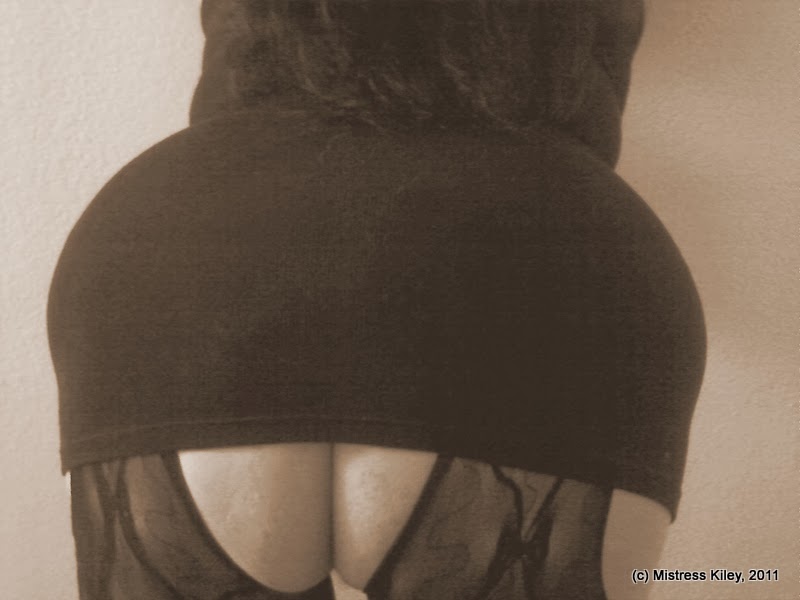 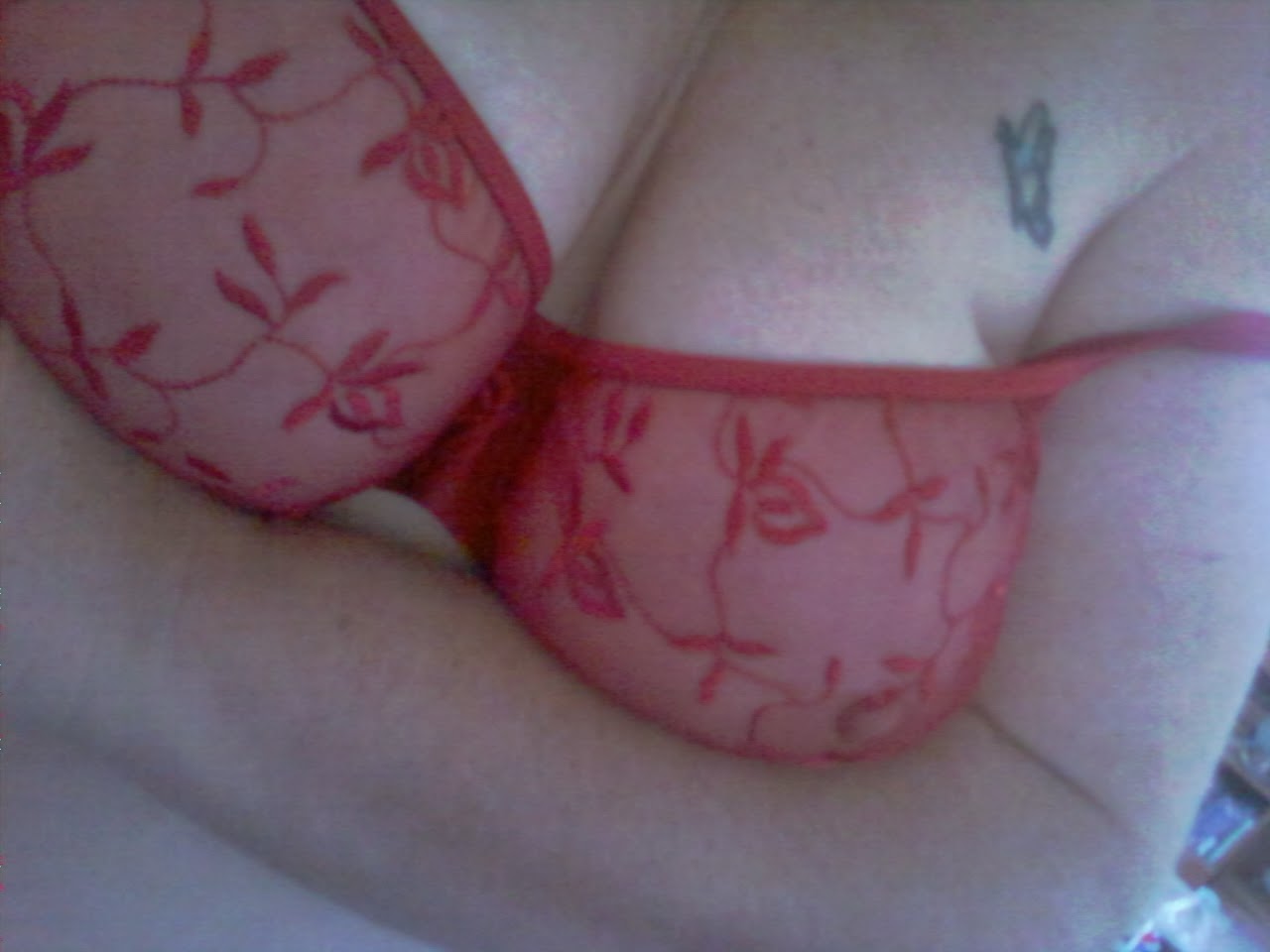 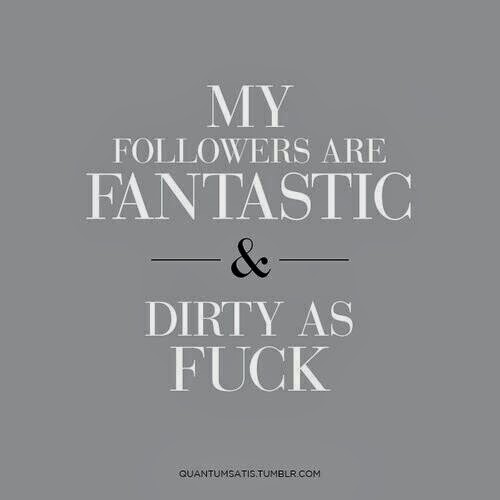 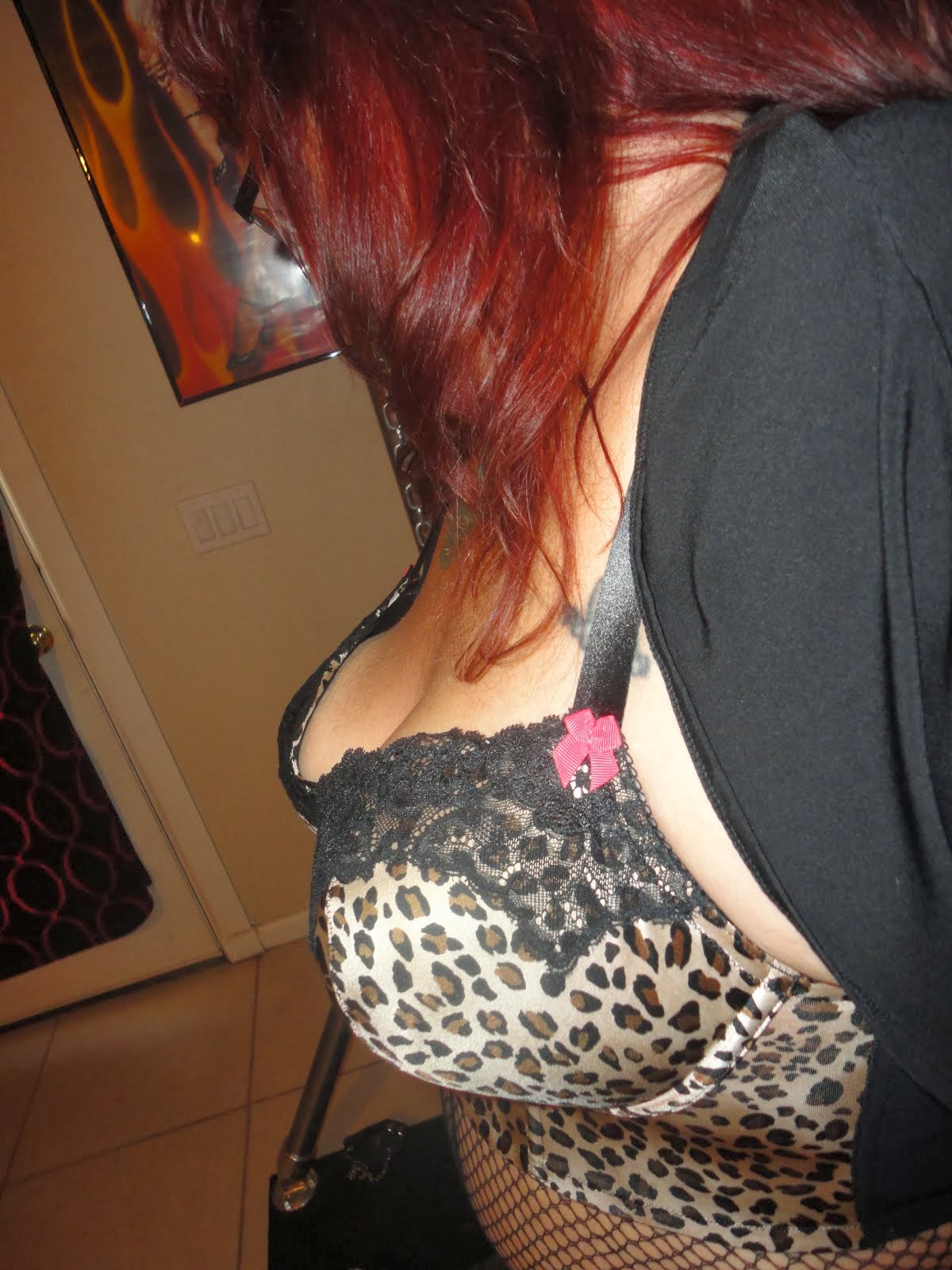